Every student in the group got a host family that consisted of a student from the Luwan High School and the rest of their family. We first met our hosts when we arrived at the school and all of the hosts had at least one parent present there as well, to take our luggage to our new home, while we continued with the welcoming ceremony. My family consisted of two parents and their two sons. The older brother Yu Yize was my host student. All of our hosts were able to communicate to us in English, but a lot of body language was needed to communicate with some of the parents and younger siblings. In my instance, the father didn’t speak English, so a lot of our conversations were translated by the mother and Yize.

Everyday life for the hosts mostly centered around school, with almost no free time during the weekdays. Our hosts would have school from 7:20 to 16:30 and three or four hours of homework every day. As the schools compete with one another to get the best results in their final exams, teachers put a lot of pressure on the students to perform well in each test and quiz throughout high school.

As this was my first time in a big city, my hopes were really high. But the city didn’t let me down. I’ve always been impressed by modern buildings and skyscrapers, and Shanghai was filled with them. I saw the third-highest building in the world, which was super cool and I even got the chance to go on a 340m-high skywalk at the top of another skyscraper. The view up there was insane. You could see the Huangpu river running through the city and the sprawling city center on the other side of the river, as well as the iconic TV tower. 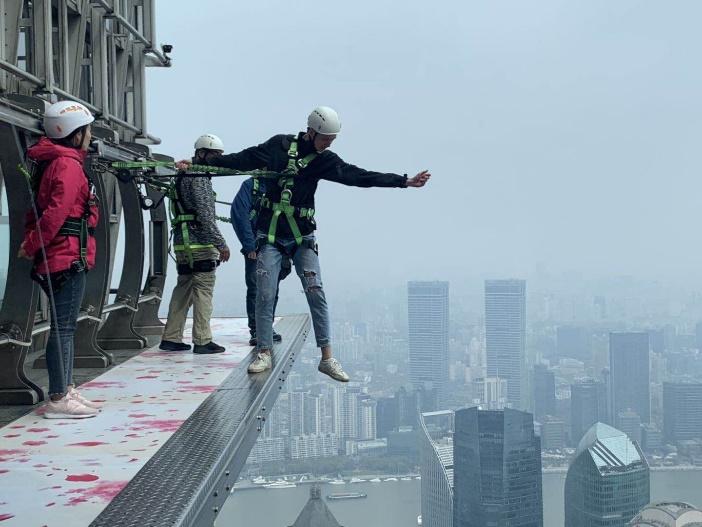 But not all parts of the city were nice. Nanjing Road, for instance, Shanghai’s main shopping street, was filled with expensive stores (some of the most modern in the city) but just a block away there were buildings in horrible condition. The air also felt thicker than in Finland, and the first day my eyes were a bit swollen.

During our last evening in Shanghai, we admired Pudong from across the Huangpu river. It was the perfect way to end a perfect trip.

During our stay in Shanghai, we all met up at the Luwan Senior High School in the mornings. We would get up early in the morning and would go to school with our hosts to have a few lessons, before going to see the city. After the bell rang to signal the beginning of the school day, all the students stood up for the national anthem of China, facing the Chinese flag located in the front of the room. Afterwards, they sat down, and the lesson began.

At lunch, most students finish their food quickly, spending the rest of their break time in their home room with one another, outside playing sports, or socializing in the corridors.

Overall, it was a very interesting and fun experience since it was so different to the school environment that we were used to. Everyone at the Luwan Senior High School was so welcoming, and they all helped us adapt quickly to the new environment and for that we are very thankful.

Photo 1: The MG gang on the Bund, on the western side of the Huangpu River

Photo 2: Oliver teetering on the edge of the 88th floor of the Jing Mao tower

Photo 3: The students from the national Chinese side. It is mandatory for everyone in the school to have their uniforms on.

Photo 4: Basketball is a very popular sport amongst the male students at the school.

Photo 5: Group photo at Luwan High School with Mattlidens students and their hosts.